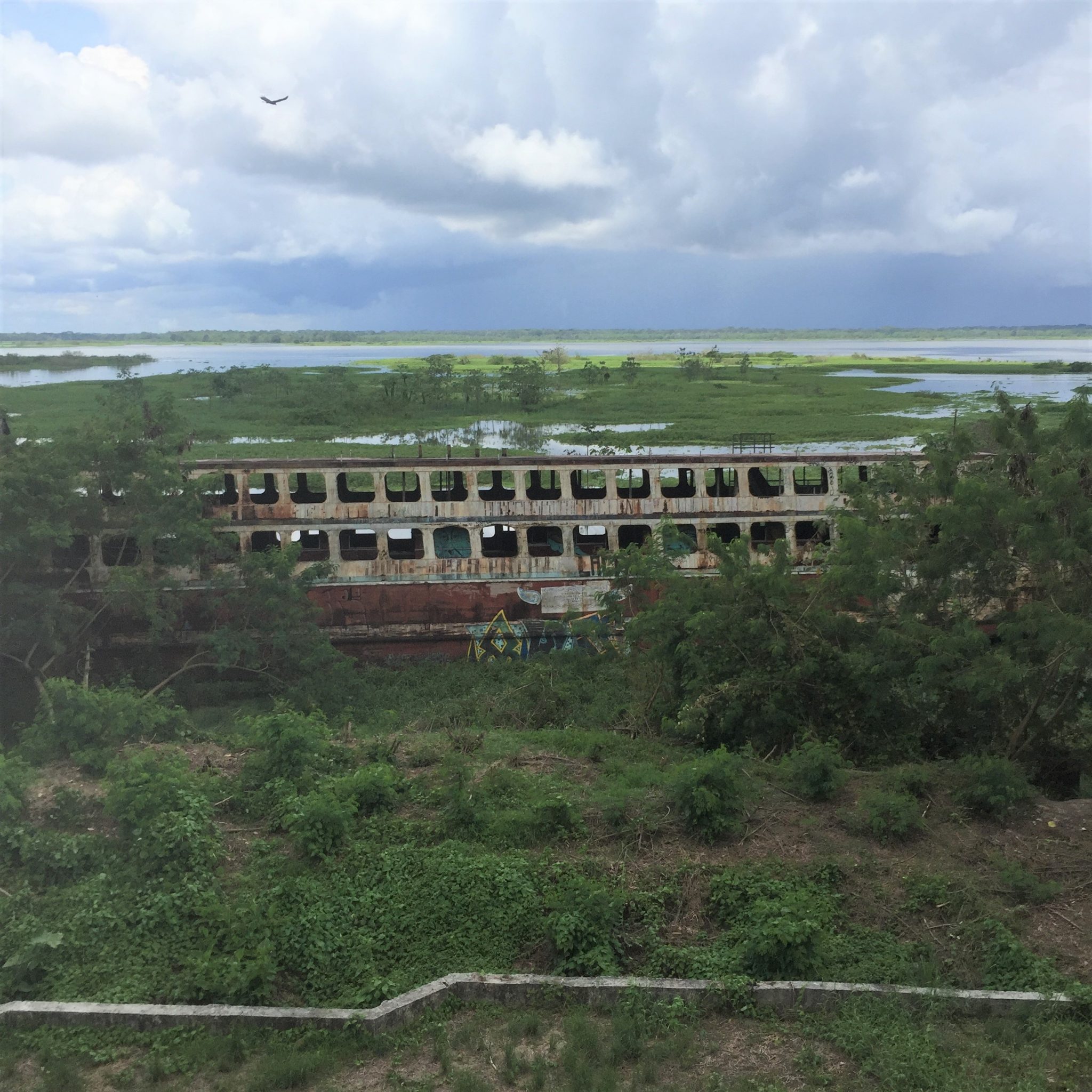 You don’t go to Iquitos for the silence.

The people at the airfield wore headphones. Perhaps everyone should. If it’s not the drone of motor taxis, then it is the ever-present whine of air-con.

Rising to prominence with the late 19th-century rubber boom, Iquitos was once the richest city in Peru. Once. Inaccessible except by boat or air, it is now merely one of the most expensive.

Art nouveau buildings abound in disrepair. Casa Morey was lucky. It has been restored. It reminds me of Lima’s Hotel B from the outside. But Hotel B does not give sachets of Head and Shoulders shampoo.

There are over 70 such buildings, in various states of repair. The Palace Hotel, once the grandest of all Peru, is now a military base. Covered in three stories of Malaga tiles, what was once a testament to art and creativity, now filled by young men and women having the creativity trained out of them.

The Iron House, a metal building designed to stay cool in the thirty to forty-degree heat.

Designed and fabricated by Gustave Eiffel ( yes he of the Parisian tower) is now filled with chemists and grocery shops.

Rusting hulks of steamers remind you this was once the most important port in Peru, more important even than Callao in Lima. Steamers full of straw-hatted gentlemen and ladies from Europe, disembarked here to begin a new life hinged around the trade of rubber and the exploitation of natives.

In the mid 20th century the Amazonian rubber boom fell prey to cheaper rubber from Singapore, grown from seed smuggled out of Iquitos by an unscrupulous Brit. That, in turn, was replaced by synthetic rubber. People and prosperity left Iquitos in droves.

Even the river has left. The waterfront, once as grand any, looks out over the swampland and channels of water, where the Rio Amazonas once stood. A living beast, it simply got up one day and left. It may yet return.

Here in Iquitos, there is still opportunity, Hilton so far the only international chain to enter. Their Doubletree hotel is an unlovely building that stands on the main square on a plot once inhabited by a stunning town hall, unforgivingly destroyed by an arrogant former mayor. Step inside the air-conditioned lounge of the Hilton and you can forget you are in Iquitos. Isn’t that the beauty of international chains? You could quite literally be anywhere. And nowhere.

Yet the Hilton is not Iquitos. And while Iquitos is now connected to Cusco by a ninety-minute direct flight, three times a week, Iquitos is not Cusco. Cusco is a freak. A town so well catered to tourists, where you can believe that going out to a nice restaurant to enjoy fusion food is a part of everyday life. But most of Peru is not like this. To travel in most of Peru, you have to accept a different level of comfort.

But Iquitos is very much Peru. In the same way that the underdeveloped North is also Peru or the barren high plains of the Andes are also Peru.

As I sat at the glassless window of the Fitzcarraldo restaurant and hotel, once a base for the eponymous Warner Herzog film, real Peruvian life played out on the waterfront outside.

Street comedians performed to gathered crowds, children sucked on toffee apples and watermelon, a boy in a monkey suit danced erratically to the sound of native drums and Easter week churchgoers strolled past, palms in one hand, ice creams, and babies in the other.

Further along, dreadlocked types laid out their jewelry on blankets, tarot readers laid their cards out on low tables, guides touted for business, and teenagers learned how to fall in and out of love on the white balustrade walls.

As the waitress brought a second Daiquiri, made from Amazon fruits, I felt glad I had visited. Glad I got to learn about life in another part of Peru. But I did not feel the need to return.