Mudslide on the Salkantay Trek 2020 in Peru 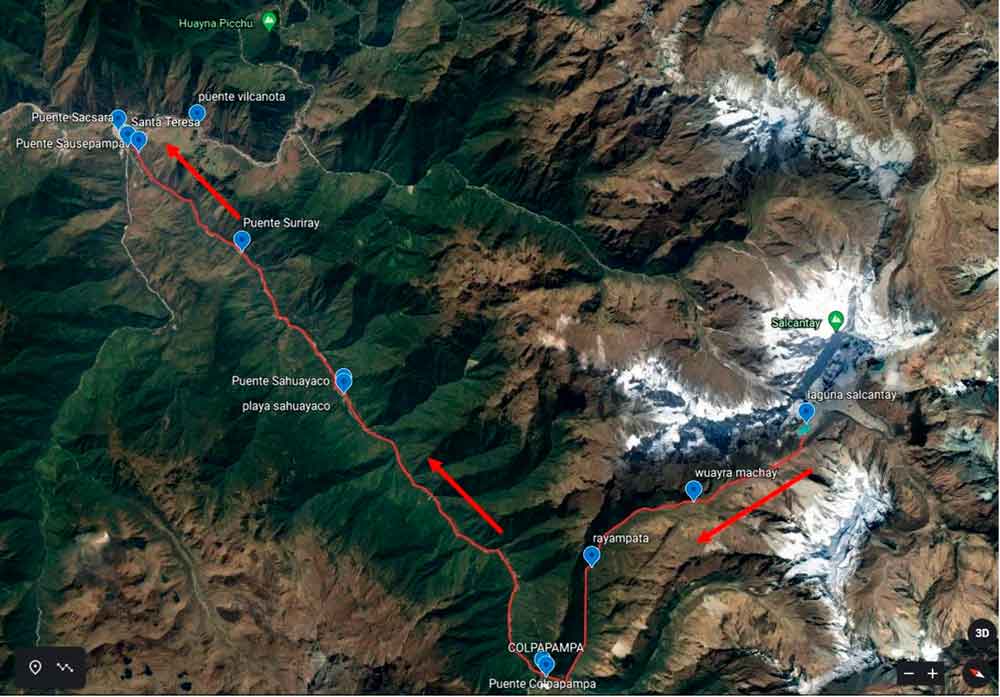 A large mudslide hit the village of Santa Teresa, at the end of the Salkantay Trek on 23rd February 2020.

This came just days after a tourist posted videos of landslides on the Salkantay Trek on 9th February 2020.

While the two incidents are unrelated, both occurred during a year of heavy rains in the Cusco area. While the rains were heavier than normal, you can expect heavy rains on the Salkantay Trek every year during January and February, which are the height of the rainy season here in Cusco, Peru. This is why we refuse to sell this trek in those months.

After the video of landslides on the Salkantay Trek was posted on 9th February, DIRECTUR, the Peruvian Ministry of Tourism and Exterior Commerce, released a statement asking tourism companies to “evaluate their operations for these routes and avoid exposing unnecessarily, their clients or staff to danger.”

However, many felt this advice was not strong enough. And that as the authority in charge of tourism in Peru, they should have closed the route until the weather improved, i.e. after the rainy season.

What caused the mudslide on the Salkantay Trek to occur on the 23rd February 2020?

The Ministry of Tourism has confirmed that the mudslide on the Salkantay Trek which hit the area of Santa Teresa was caused by an avalanche on Salkantay mountain. A large section of rock and ice from the Salkantay glacier fell off and into one of the lakes below. This caused a large quantity of water to flow out of the lake and down the valley, creating the mudslide which hit the villages in the Santa Teresa area.

A fuller government report about the cause of the Salkantay mudslide was issued on 4th March 2020.

As mentioned by some sources, the climate crisis has certainly had a role to play in this. The glaciers in Peru are some of the worst affected by the rise in temperatures over recent years. Global warming means the glaciers are less stable, and slowly reducing in size. While sometimes they simply melt, at other times this means large sections of rock and or ice fall off, as in this case. The rains may well have contributed to the avalanche, as the altitude where rain falls as snow is much higher than it once was. This is being seen in mountains across the world.

Is this the first mudslide in Salkantay Trek area?

This is not the first time a mudslide has occurred in the Santa Teresa area where the Salkantay Trek passes. 22 years ago a similar mudslide came down the Aobamba valley and wiped out much of the Santa Teresa area and Hidroelectrica area, including the train line that used to carry on from Santa Teresa to Quillabamba. This is an area that will always be prone to such events during the rainy season. And even more so with the warming of the climate.

Who was affected by the mudslide on the Salkantay Trek?

Information is unclear. But current estimates say 1500 locals have lost their homes. 3 schools are said to have been destroyed (no kids inside at the time as it was both Sunday and the holidays). Most affected seem to be the areas of Sahuayco and Chaullay, with 50% and 80% of their buildings thought to have been destroyed. 6 people have been killed and 7 are still missing according to reports on 29th February.

10 tourists were evacuated by helicopter from the Salkantay Trek, near Colpapampa, after the mudslide. But why operators were still taking people on this route after the landslides of 9th February needs to be questioned.

The hot springs at Santa Teresa seemed to have escaped by inches. Photos show the river almost reached them. Some reports say they were open as normal again today.

Is the alternative route to Machu Picchu still open?

The normal train route between Cusco and Machu Picchu is currently fine and open as normal.

This is all the information we have at present. Emergency services are working in the area to help those affected.  It seems most people managed to escape safely, but there has been at least one confirmed death, and perhaps 30 people missing. Fortunately, it occurred during daylight hours when people were awake and able to react to the noise and escape.

As always, if you are thinking of visiting Peru in January or February, our advice is the same. Yes, you can travel to Peru. And you can do some great day hikes. But these months are not suitable for multi-day trekking in Cusco. Nor in other parts of Peru such as the Huaraz area. You can still have a great time in Cusco in the rainy season, you just need to plan your itinerary accordingly.

There was also a landslide on the Inca Trail on the 23rd January 2020 at Wiñay Wayna campsite, which killed a porter. After this, the authorities decided to close the Inca Trail. It was due to close for all of February anyway, it always does, so it only closed a week early. Originally, they said it would reopen 1st March 2020, then later they changed that to the 16th March 2020. This was a good decision and the correct one to take for the safety of trekking company clients and workers.

So why did they not make the same decision after the videos of landslides on the Salkantay Trek on 9th February?

If you had booked the Inca Trail between 1st and 15th March, what happens?

SERNANP  the park authorities along with the Ministry of Culture- who together control Inca Trail, released a statement on the 21st February saying they were opening an alternative route. From Salkantay over a little-used mountain pass ( different to the usual Salkantay Trek), then down the valley to out to KM82, where the Inca Trail starts, and along the valley, to KM88 so people can take the train to Machu Picchu at the end of their trek.

What they did not mention is that the pass you cross is  5200metres/ 17.000 ft high. Combine this with the fact you are still traveling through the Salkantay area and the rains were still falling and the decision seems utterly stupid. Following the 23rd February mudslide on the Salkantay Trek, it is not known if this option is still being offered. It certainly should not be.

How can you help those affected by the mudslide on the Salkantay Trek?

The best way you can help is to continue to come trekking in Cusco. Albeit at a more suitable time of year. This is the same advice that was given after the 2015 earthquake in Nepal which affected areas that lived off tourism. The trekking routes will soon be opened again and the families that live along these routes, the guides and cooks and mule men that work along these routes, will still need income. In fact, those in the area will need it more than ever.

If you would like to donate clothes, books, or other goods, please bring them when you come to Peru and we can help get them to the people that need them. Or if you want to donate anything but are not coming to Peru, contact us and we will try and connect you with the right people.

7 Comments On Mudslide on the Salkantay Trek 2020 in Peru

Thank you for this information. I am traveling to Peru from April 10 to April 29 and still trying to plan my itinerary. Cusco and the Salkantay trek are definitely the most important items on my list. When will there be information on the opening date for the Salkantay route? Thanks.

Hi. Am trying to find out for you. Not heard anything yet.

There is still no official communication about when it the Salkantay Trek is expected to reopen. We asked the authorities today and they had no information to share.

What a catastrophe. My husband and I just returned from a glorious 2 week trip ( feb 4-16, 2020) with long trek over the Lares Pass (14,761′) and down to Ollantaytambo, thence to Machu Picchu. We were met with such kindness and love.

We want to help the families. How to do this as we are back in the US now?

If you email me at mark.smith@amazonas-explorer.com I can put you in contact with someone who is involved in the co-ordinations.

Hello,
Thank you for this information. My spouse and I will be coming at the beginning of April for the Salkantay Trek, if trails are open. Regardless we will be coming to peru for two and a half weeks.
We are both medical professionals who work in emergency medicine.
Do you know of any needs for medical help/ house rebuilding/ ect. that you could get me information for?