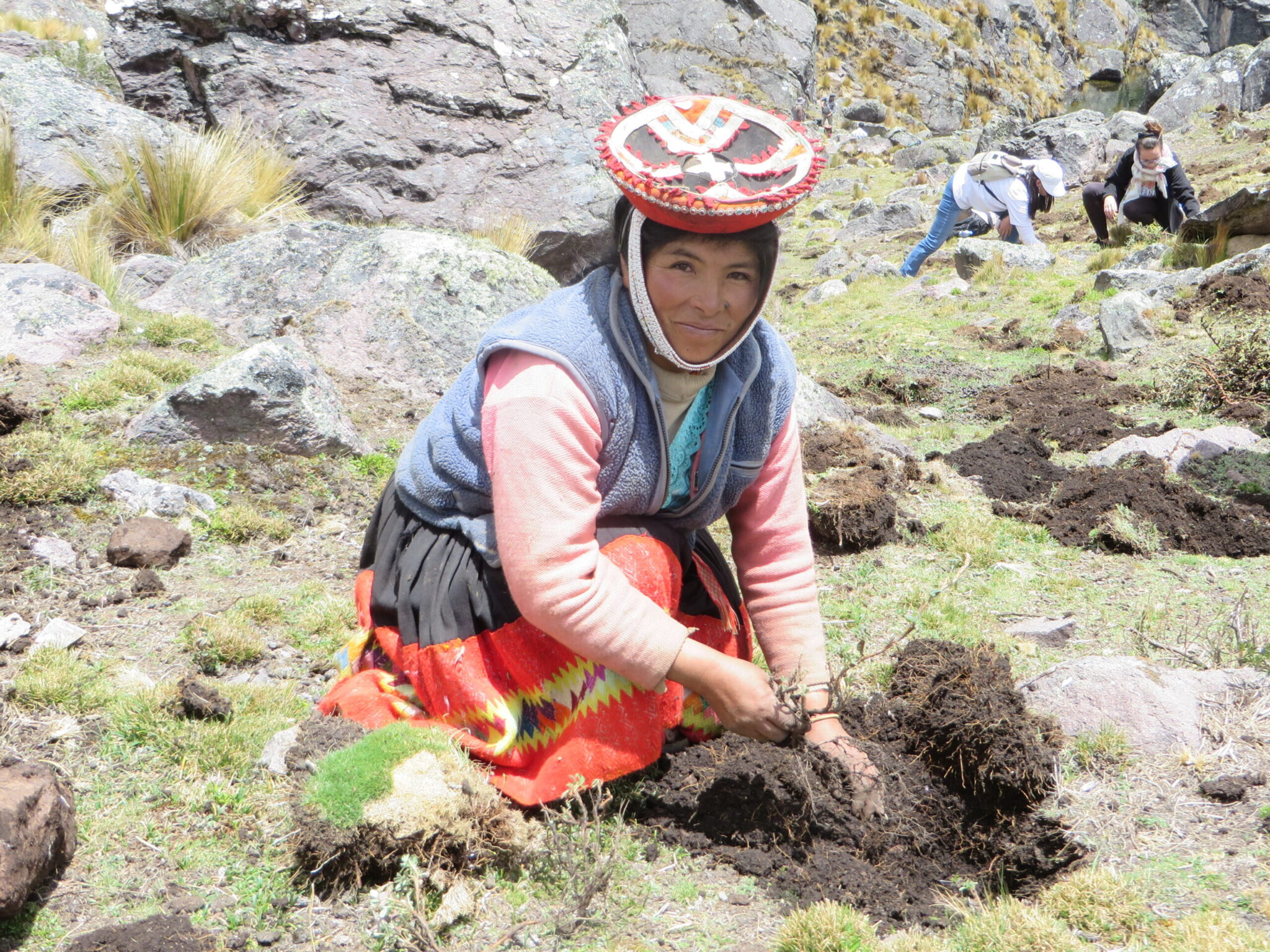 In the last 8 years, I’ve lived in Peru, I’ve split my time raising my family between the Andes and Peru’s capital Lima.  February 2020, a month before the pandemic, we moved back to Lima, choosing to live in the suburbs for more space and quiet. On March 16th, 2020 President Vizcarra stripped all inhabitants of Peru of their civil liberties, including commerce, creating stillness in Lima that I’ve never known.

As the weeks passed the brown fog that continuously hovers over Lima began to clear. A bright blue sky, that I didn’t think I would ever see in Lima came into focus. Birds, finally undisturbed by the constant rumble of jets and traffic, seemed to sing more, free to be birds. For the first time since moving to Peru in 2012, standing guard to the East, a proud mountain emerged, reminding us the Andes are around a 100Km’s as the crow flys out of our backdoor.

For the first time since the Spanish conquered, elite families didn’t have a team of servants to cook, clean, and care for their children. Families learned how to cook together, grow gardens, compost, and ride bikes together. In a city where people typically drive two blocks to the store, the government prohibited all use of private vehicles, getting people out of their cars, walking, meeting their neighbors. The first hints of community I’ve ever seen in Lima started floating to the surface, as neighborhoods held food drives to feed some of the most impoverished areas of the city, helping bridge the gap between the absent state and the needs of the country.

As people were beginning to leave their homes again, for the first time since I’ve been in Lima, everyone became an outdoor enthusiast and mountain biking became the biggest I’ve ever seen it here. Lima a very “to see and be seen” kind of culture, is choosing the wilderness over discotecas and beach parties. People are convening in nature again, learning why the reward of glacier-fed lakes, the condor view of a valley floor, or ruins have inspired artists, writers, and adventurers all over the world. They are starting to put down their phones, to tune out the cacophony of the 21st century and let the whisper of wind moving through the trees, the roar of rapids, the crash of the waves, or the howling of the wind in their ears as they descend rolling single track on their mountain bikes, bring them back to themselves.

The pandemic has been devastating on so many levels leaving the world craving prior normalcy. When you see how the globe has shifted in the last 9 months, the refocus on nature, health, and family, I can’t think of anything more tragic than returning to how things were before. At Amazonas Explorer, we don’t want things to go back to normal, we want to learn from this experience and be part of the change in the industry that will help combat climate change, preserve pristine natural areas, and create a space for local cultures to thrive. Nature is warning us of things to come if we keep consuming at the level we were before, and as a company, we are willing to put our profit where our beliefs lay. 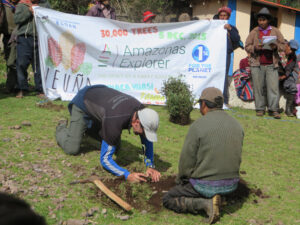 Moving forward Amazonas Explorer has decided to continue our fight against climate change. In addition to being a B-Corp, a member of 1% FTP, a member of TAP, and carbon-neutral, for 2021 we are taking the appropriate steps to become carbon positive, and join “Tourism Declares a Climate Emergency”, a community made up of 147 travel organizations who have declared an emergency and “Science Based Targets”, leading the way to a zero-carbon economy to drive sustainable growth.

Right now, with tourism being shut down for the majority of 2020, we have not been able to plant our usual number of trees for our 1% For The Planet project. To help bridge the gap, we have started a GoFundMe campaign to meet our 2020 donation to plant 10,000 native tree’s in the Lares watershed. Click Here to learn more about what we are doing or make a donation. As a player in the tourism industry, we are excited about the opportunity to NOT go back to normal but to become more regenerative and thoughtful in the manner we conduct business.

Thank you Gina, I tried to setup a GOFUNDME here in US, but I had trouble setting up for funds to go to Peru so that’s why I asked you guys. I’ll keep working on it. I think my friend’s past clients would be more than happy to contribute!”

Clearly Paul you still possess the passion. In the sense that the pandemic will have changed things they won’t ever be the same. But the challenge to have others see what really is in the best interest of us all will be Herculean. Hasta & Namaste

I love following your blog! I found it right after the pandemic hit and I feel like I know a bit about what’s happening in Peru since I visited in summer 2019. I was planning to return in 2020, then everything was shut down. Very interesting article and perspective about the future. Thank you. I plan to visit as soon as I can after pandemic. I’m curious how you got the GOFUNDME effort going for the Peruvian porters and others. I was under the impression GOFUNDME only worked in USA. I wanted to start a GOFUNDME for a group of people I’m acquainted with in Ollantaytambo. They are growing organic vegetables for the less fortunate families in the mountains nearby. They’ve been doing this for about 10 years and it seems there isn’t ever enough food for all the people who need it especially these days. Can you let me know any insight on the fundraising? Thank you.

First off, thanks for following us, we really appreciate it! Second, currently, the owners are trapped in Wales and have not been able to return to Peru. From Wales we have done several fundraising for our communities of porters, Tour Guides, and now for the tree planting. While the GoFundMe is based out of the UK, we are able to transfer the funds to the corresponding Peruvian bank accounts. This is how it can be done. There are also funds and grants with various organizations as long as they are a certified NGO. I hope that helps.

Thank you for the reply/ info. I will research more to help my friends there! It sounds hopeful.

Hi Paul, saw the post about helping Guides reinvent themselves. What a wonderful way to help! Is there any way my friend can apply for this opportunity since he was a tour guide in Cusco area and is out of work and pursuing his organic farming and sharing the food with many others?

Our GoFundME accounts are now closed for almost two months now and many of the donations were from our past clients, guests, friends, family members, and travel organizations that we are associated with. Many of the contributors had actually travelled with our guides and knew them personally from events. If you wanted to do something similar you could set up a GoFundMe account for him, and then he could reach out to the companies and guests that he guided for and ask them to contribute. If he was aligned with companies that didn’t support informal sectors, they will be delighted to help him. Most of our colleagues from other agencies have set up similar funds for their guides and porters.

Best of luck to you guys.

WE have been doing restoration of our andean ecosystems for years and you will not only been a partner, you really love it and this describes much better the escence of a real conservationist. Yes this 2020 you not been with us as your big team also, but you know we are doing all the best that we can to don’t stop on the mision. We are thinking that good times will come back, and the idea to don’t continue with the famous “NORMAL” must to be: do more real and concrete actions on the ground, eficiently and good for all of us, is what the planet and the local people claims, in that way we will see more human quality than human full of confort. Many hugs from Peru my brother Paul.