Our Climate Emergency Plan: The Story so Far 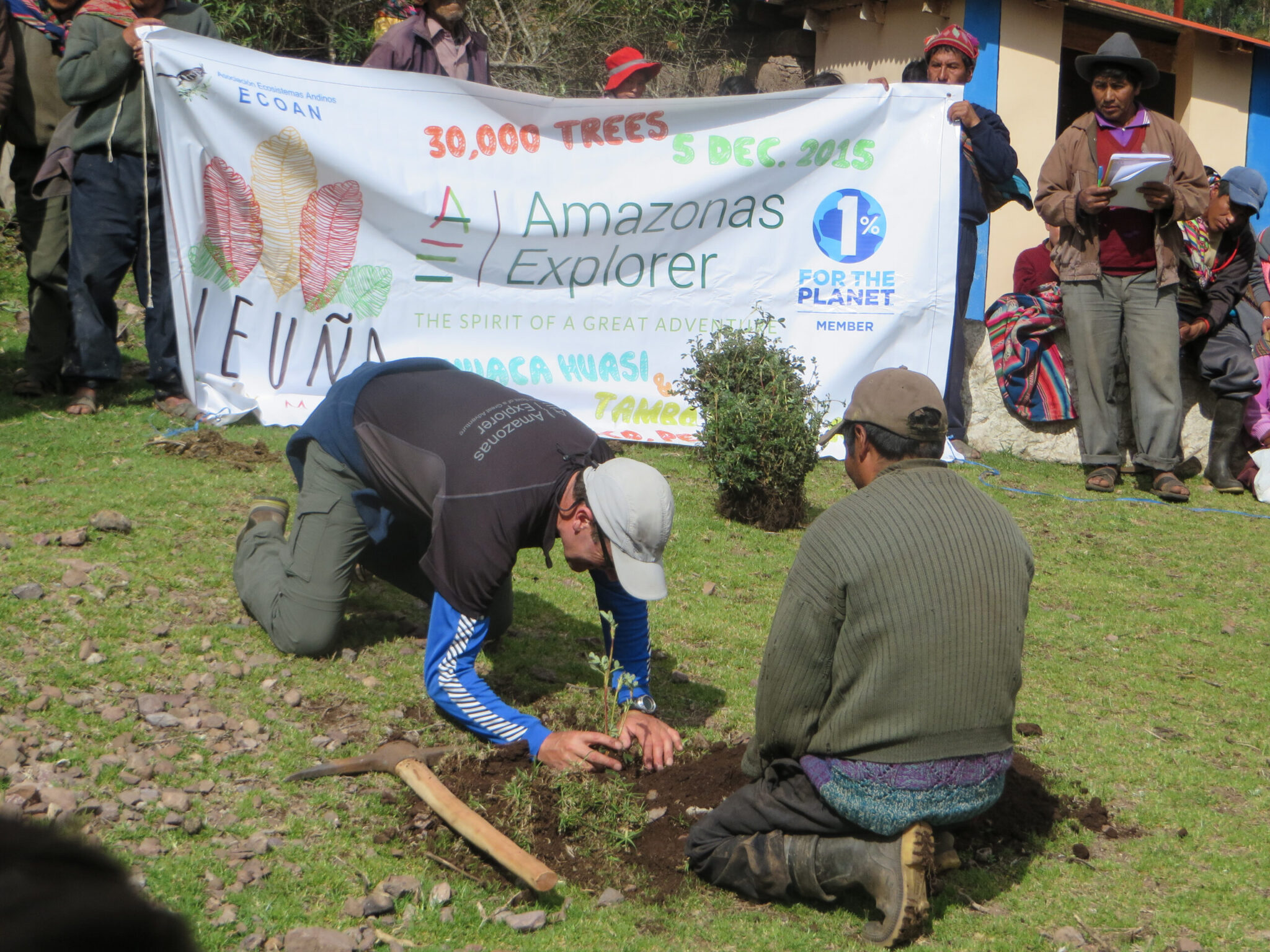 At the beginning of 2021 we posted a blog about why we’ve decided to join “Tourism Declares a Climate Emergency” (check it out here), and we wanted to tell everyone our history and why this effort is so important to us.

Ever since Urs Bigger, the founder and brainchild behind Amazonas Explorer- the Spirit of a Great Adventure, first explored the rivers of Venezuela, Ecuador, and Peru in the early 1980s, protecting the raw and wild natural landscapes he explored continues to guide our company’s trajectory today.

Step forward to 2007, when after an evening with Andy Middleton of TYF and a read of Lestor R Brown’s inspirational and slightly scary Plan B 2.0,co-owner of Amazonas Explorer, Paul Cripps decided it was time to “put his money where his mouth was”. Within the year Amazonas Explorer became the first (and to date only) Peruvian travel company to become a member of www.onepercentfortheplanet.org.

The concept behind 1% For the Planet, is fairly simple – According to Lestor R Brown, it would cost just 1% of the GDP of the World to solve climate change and create a sustainable economy for future generations going forward.

Unfortunately, at the time, international governments were unwilling to take action and even less willing to commit 1% of their nation’s GDP. In 2002, Yvon Chouinard, founder of Patagonia, and Craig Mathews, founder of Blue Ribbon Flies, created 1% for the Planet and called upon private industry to lead the fight against climate change. The idea, “If the Governments are not going to do anything about it, we, hereby commit to annually donate 1% of our turnover to sustainable projects that actively work to mitigate climate change.”

What attracted Paul, was he could choose where to distribute Amazonas Explorer’s 1% donation. For help, Paul turned to his good friend and ex Jungle guide, Constantino Aucco who had recently set up the NGO ECOAN Peru

“Tino”, was motivated to start his NGO when as a passionate birdwatcher, he noticed that certain birds in the high Andes Lares watershed (just beside the slightly more famous Sacred Valley of the Incas) were getting increasingly hard to find. Continual deforestation by local communities looking for firewood destroyed the bird’s habitats.

This demand for firewood had been exponentially exacerbated by unregistered tour operators who were now offering treks in the region. The rogue guides would demand bundles of firewood to keep their tourists warm at night and for building a traditional Pachamanca (Peruvian pit roast) that requires vast amounts of firewood. This was clearly not in the slightest bit sustainable.

Tino, and his team of Quechua-speaking staff, quickly realized the way to getting anything effectively done in the Andes was to enlist the help of the local communities. Tino was able to recruit community leaders of 23 different communities in the area and developed a plan to promote mass reforestation.

By using the Inca tradition of Ayni, whole villages were mobilized and encouraged to look after their own remaining native forests of the beautiful, but rather slow-growing, Queuña Polyepolis. In 2007, Amazonas Explorer staff, friends, and families helped the local community of Pampacorral plant 7,000 trees and were moved by the experience and the collaboration from the community.

A couple of years later, by employing better planting techniques, we were doubling the number of trees planted annually. During this time ECOAN helped communities to set up their own nurseries to properly acclimatize the seedlings to maximize the communities’ return on their labor and the NGO’s return on trees.  ECOAN also began the legal process of creating conservation areas, thus ensuring the new forests’ long-term survival. In 2011, Paul made this short video explaining how the tree planting project works and what effects it can have on climate change in the Andes, and how it can help the local communities regenerate much-needed forest cover.

In early December of 2014, Lima hosted the COP Climate Change talks. This inspired Amazonas Explorer and ECOAN to do something bigger and so, Queuña Raymi was born. Literally translated Queuña Raymi means “Festival of the Queuña tree”. The goal was to collaborate with 3 communities (Huilloc, Patacancha, and Rumira Sondormayo) and thousands of volunteers, to plant 50,000 trees in one single day. After an exhausting 8 hours of lung-busting high-altitude digging, an incredible 58,000 trees had been planted and made the headlines in all the Peruvian papers, as the COP presidents sat down to their first meeting. Click Here to see how ECOAN and the Queuña Raymi festival functions, as tour operators and Peruvian indigenous communities collaborate to help in the fight against Climate Change.

The concept had been born and there was no stopping it. Whilst Amazonas Explorer’s short-term goal was to help plant 1 million trees by 2020 (and we nearly did it!), ECOAN has, since 2002 planted over 2 million trees, and the Queuña Raymi goal in just the 2020-1 season was to plant a staggering 385,000 trees in one 4-month season. Considering Covid19 is ravaging Peru right now, this is an incredible achievement.

Amazonas Explorer still gives at least 1% of its turnover to this specific tree-planting project. While this felt like a step in the right direction, it still didn’t feel like enough to help mitigate travel’s role in Climate Change. So, from 2020 onwards Amazonas Explorer has committed to planting at least 2 Trees, Per Client, Per Day, during their stay with us in Peru.

In 2020, with Covid-19 putting a stop to all travel revenue in Peru, Amazonas Explorer has been unable to plant its usual 20 – 30,000 trees. While the paralyzation of travel due to the pandemic is out of our control, we wanted to do something, so we set up a GoFundMe page where anyone can donate to our reforestation project. For only $1, a tree will be planted on your behalf.

Paul Cripps currently sits on the ECOAN Directors board in an advisory role and personally donates at least 1% of his time to actively seeking new ways to help ECOAN plant more trees. Click Here to read the ways we are working to help fight against Climate Change and our declaration of a Climate Emergency.


Comment On Our Climate Emergency Plan: The Story so Far

[…] “Science-Based Targets”, leading the way to a zero-carbon economy to drive sustainable growth. Click here to read about what brought us to the decision to join “Toursim Declares a Climate […]