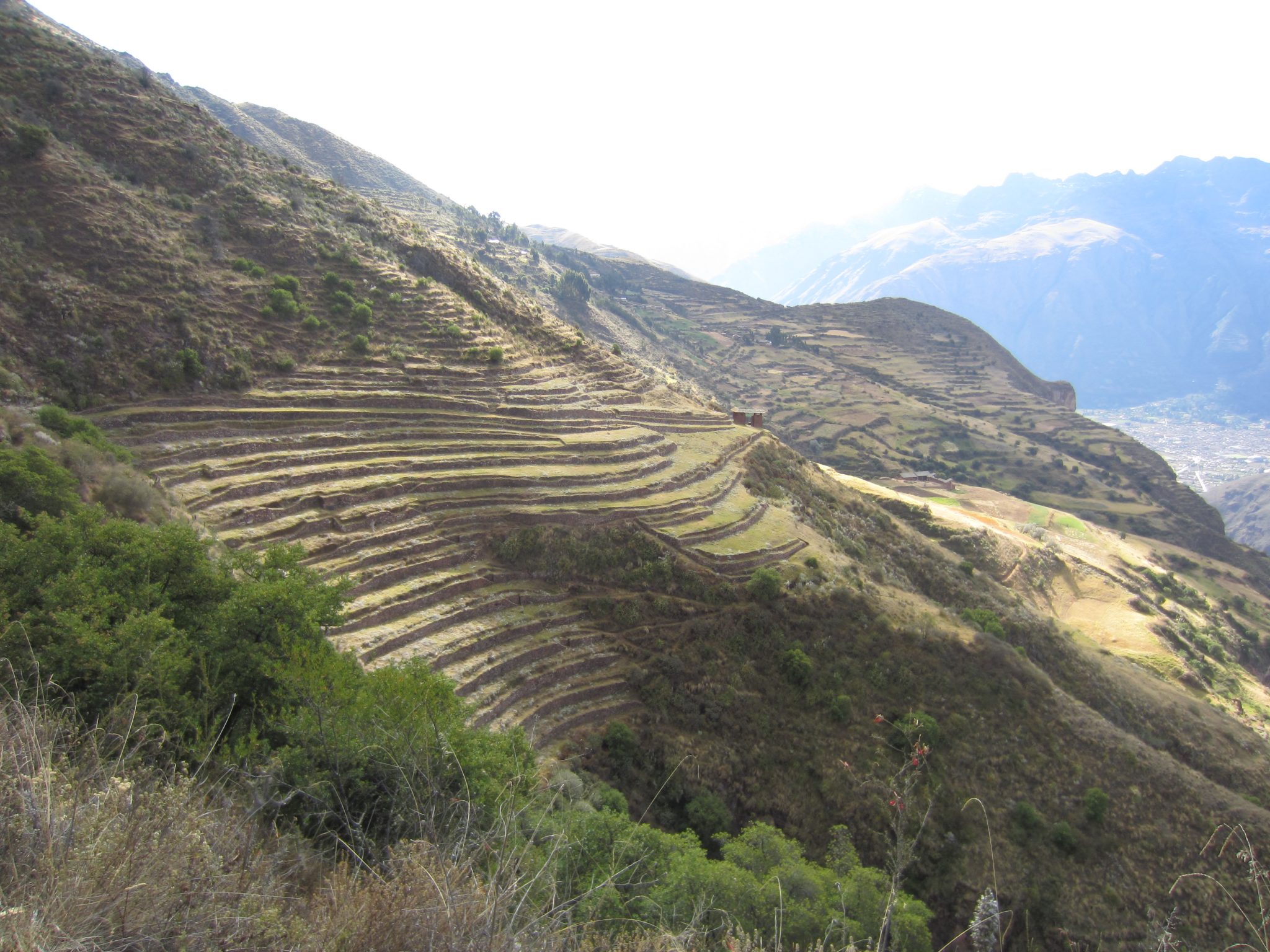 The Huchuy Qosqo Trek is a great overnight trek in Cusco.

Ever dreamed about waking up at Machu Picchu Sanctuary Lodge, just a few minutes walk from the ruins. Then you saw the price? How about waking up just yards from Huchuy Qosqo, an old Inca summer palace instead? It’s cheaper, you can enter the ruins when you want, and you are unlikely to see more than ten people all day. We only saw two.

Situated above Lamay in the Sacred Valley, this two day, one night trek can be done from either Cusco or the Sacred Valley. We use 4x4s to gain the altitude, using dirt roads built to maintain the reservoir and small villages to near the 4200 metres high point. From there, most of the walking is downhill.

The Huchy Qosqo trek is within the reach of most people. Day 1 is mainly downhill, on a restored Inca path. The highlight is when the trail enters a narrow canyon full of flowers and hummingbirds, with steep Inca steps and wooden bridges taking you alongside a gurgling stream.

Coming out of the canyon you continue along the Inca path, with the valley dropping down beside you, to eventually pass through the old city gates into the site of Huchuy Qosqo.

Huchuy Qosqo lies at 3650 metres and was thought to have been built by the Inca Viracocha around 1420 as a summer retreat. It has a great location, perched high up on the edge of the Sacred Valley, with a view across Lamay to snow-capped peaks.

Built around a large ceremonial square, much of the site has been restored, with more in progress. When the Incas left, it was settled by Spanish conquerors, and the difference between their two building styles is notable. After exploring this usually deserted set of ruins, you hike another ten minutes to your camp.

As with all our trips, the camp is already set up for you. After a wash, you can enjoy a well earned afternoon tea, before putting on some warmer layers for a three- course dinner and star watching. Light pollution here is minimal, so it is a great place to see the Milky Way as well as the Southern Cross. Or if you prefer, your guide can point out the Andean constellations- such as frogs and llamas.

We took the upgraded camping kit, complete with camp beds, blankets, foot rugs, a shower and a heater for the dining tent. It was very comfortable indeed. For many people, the standard kit will be fine, but the upgraded kit is great if you are not someone who enjoys camping. By adding extra comfort we can give you the experience of being in this special place, beneath the vast Andean sky, which you would not otherwise get.

Next day, after a breakfast taken outside to enjoy the view, you hike down to the valley. The path is good and wide and takes between two and three hours without rushing. So you can be at your hotel just after lunch with the rest of the day to relax.

Huchuy Qosqo is one of the best short treks in the Cusco area. And the fact that you will probably have it all to yourself only makes it better. There are plans to build a cable car here, and while the plans have been touted for many years, they seem to have been given a new lease of life. If that happens, the place will change forever.