Why you should NOT hike Rainbow Mountain 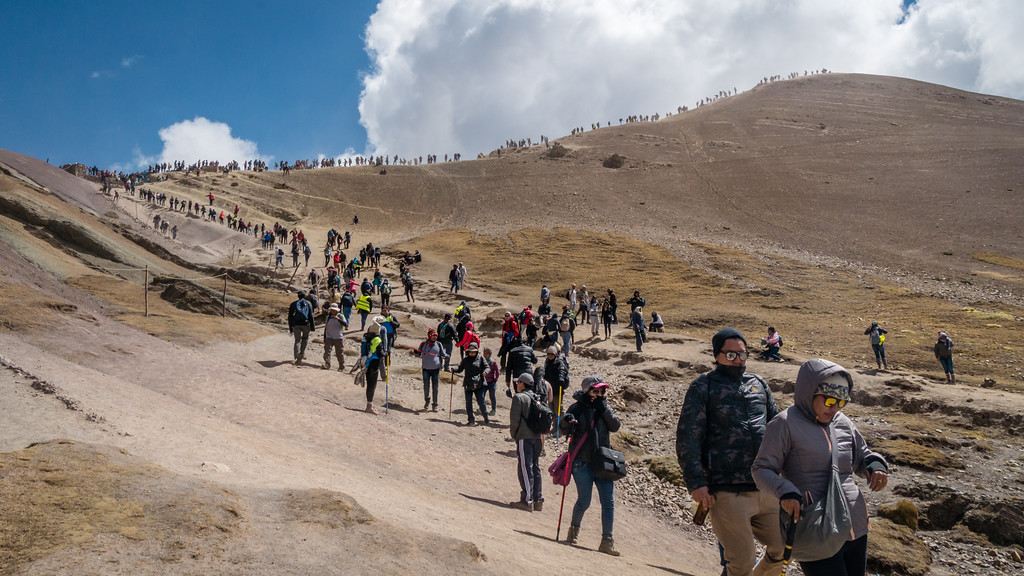 Rainbow Mountain saw yet another pitched battle between locals over who has the right to charge entrance fees, on 8th March 2020. 4 people were wounded by bullets.

Locals then attacked the police station, demanding those who had been held over the battle were released. Two policemen were injured in the attack, one seriously.

This is the latest in a long line of problems generated by Rainbow Mountain`s sudden rise to fame.

Check out: Our Southern Valley Tour to see highlights of a barely visited part of Cusco. Get off the beaten track and explore!

There is a reason we refuse to sell Rainbow Mountain tours. While we love to offer what people want, sometimes we have to say no. As a company that prides itself on operating responsibly, Rainbow Mountain is not something we can offer at present.

It is a perfect example of how tourism can go wrong. Plucked from obscurity a few years ago, it soon went viral on Instagram.

The result was a sudden boom with no control. Communities bulldozed car parks and roads into the fragile, high altitude environment, to cope with the sudden explosion of visitors. Cheap, often unlicensed operators led the charge, undercutting each other on price and quality to gain their portion of the sudden gold rush of tourists wanting to go there.

About 1000 people per day go to Rainbow Mountain. That is twice as many as are allowed on the Inca Trail each day. There are queues for selfies. The paths are being badly eroded, which in turn opens them up to even more erosion through the runoff of rain. Tourism has become a big problem here.

When you introduce large amounts of money to a place that previously had very little, it can cause problems. There was a pitched battle between two communities in 2019 on the top, video here. People fought each other with slingshots and stones because one community had built a shorter access route, which the other community feared was going to cut them out of the money. One person died and various were injured. So the latest battle in March 2020 comes as no surprise.

Are the authorities controlling Rainbow Mountain?

Local authorities have intervened several times due to the number of unlicensed operators taking tourists to the mountain. They have also had to close the route several times due to bad weather with unscrupulous operators continuing to try and take tourists there, despite conditions on the mountain and the drive there being unsuitable due to snow. Various tourists have had to be rescued suffering from hypothermia, due to being inadequately prepared and because the companies continued to try and operate despite the warnings.

However, DIRECTUR, the Regional Tourism Authority, let it be known that the locals in the Rainbow Mountain have repeatedly obstructed their attempts to bring order to tourism on Rainbow Mountain.

There have been various deaths on Rainbow Mountain

December 2019, 2 Mexican tourists were struck by lightning on Rainbow Mountain. Fortunately, they survived their injuries.

June 2018 a Korean/US tourist died on Rainbow Mountain, from a heart attack. The extreme altitude places a lot of extra stress on your heart. He was 70 years old.

August 2016 a French tourist died on Rainbow Mountain while with his family. It is reported that the 50-year-old man fell repeatedly.

Check out: Our Southern Valley Tour to see highlights of a barely visited part of Cusco. Get off the beaten track and explore!

The extreme elevation can cause heart problems and altitude sickness

At  5200m of elevation, over 17, 000 feet Rainbow Mountain is far higher than any other place regularly visited by tourists to Peru. Yet is is continually sold to anyone who wants to go. Whatever age and whatever fitness and however acclimatised or not they are.

By comparison, the highest point on the Inca Trail is 4212 m or 13,819 feet. The highest point on our Lares trek is 4400m or 14435 feet. All far lower than Rainbow Mountain. And anyone doing those treks will tell you that altitude has a significant effect.

We will not sell you Rainbow Mountain

So sorry, we would not be responsible if we offered it. We do however offer the Ausangate Circuit, a fantastic 5-day trek that gives you views of rainbow-colored mountains. You will probably have the trek to yourself. It is a trek we would love to sell more, but with two passes over 5000m, it is, unfortunately, a little too tough for most people, who do not have the time to acclimatize. But if you are looking for a real challenge, and beautiful remote trekking, and you have the time to acclimatize properly beforehand, then this is the best trek of its kind in Southern Peru.